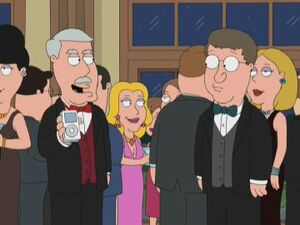 Bill Gates (born October 28, 1955 in Seattle, Washington) is the co-founder and chairman of Microsoft and one of the world's richest men.

He is one of Carter Pewterschmidt's poker buddies, along with Michael Eisner, both of whom are sometimes followed to Carter's poker games by Ted Turner, as seen when Peter Griffin joins a game in "Screwed the Pooch".

In "Ocean's Three and a Half", he attended Pewterschmidt's gala. Pewterschmidt taunts him by showing off his ownership of Apple's iPod.

In "The Splendid Source", it is revealed he is one of the employees at The Source of All Dirty Jokes.