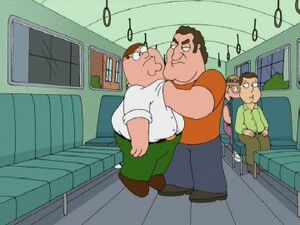 He provided the voice for the angry bus passenger in the "No Bones About It" segment of "Family Guy Viewer Mail No. 1".

Retrieved from "https://familyguy.fandom.com/wiki/Bill_Goldberg?oldid=195478"
Community content is available under CC-BY-SA unless otherwise noted.