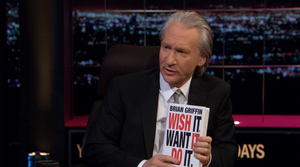 Bill Maher (born January 20, 1956) is a comedian and talk-show host. He is best known as the host of the HBO comedic news show, Real Time with Bill Maher.

Maher guest stars as host of his show, in "Brian Writes a Bestseller" with Dana Gould and Arianna Huffington where Brian Griffin promotes his book, Wish It, Want It, Do It.. With Brian there, he points out all of the flaws the book has. Eventually, he forces Brian into confessing the truth that he wrote the book badly and believes himself that it is junk. He loses respect for Brian saying that a real author would write better and stand by their words no matter what. When Brian tries nervously to gain some respect back, he urinates on the set, leading Maher to furiously chase him out.

Bill also appears in "Bigfat" to sing a line in "Let's Go Montreal the Way".

In "Emmy-Winning Episode", he tips off Peter that there is a conspiracy against Family Guy in its attempt to win an Emmy.

Retrieved from "https://familyguy.fandom.com/wiki/Bill_Maher?oldid=198769"
Community content is available under CC-BY-SA unless otherwise noted.