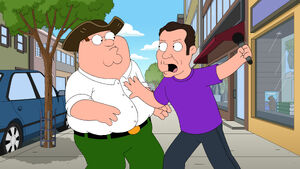 Billy Eichner (born September 18, 1978) is an American actor, producer and comedian, notable for Funny Or Die's Billy on the Street. He is also known for work on the show Parks and Recreation. During each episode of Billy on the Street, Eichner goes out to the streets of New York and asks pedestrians questions about pop culture. Recurring games are "For a Dollar" and "Quizzed in the Face".

Billy appears as himself in "Pawtucket Pete" as he aggressively quizzes several people about Peter Griffin as the new spokesman for Pawtucket Patriot Ale, berating those who are not familiar with him. When he takes off, Peter notes to one contestant that he needs a lady friend. Billy reappears behind him and exclaims that he's gay, as Peter notes that he must have run around the world.

Retrieved from "https://familyguy.fandom.com/wiki/Billy_Eichner?oldid=208927"
Community content is available under CC-BY-SA unless otherwise noted.