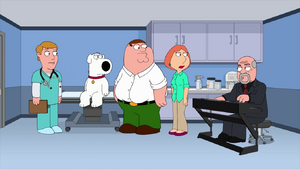 William Martin Joel (born May 9, 1949) is a multi-platinum American singer-songwriter and pianist.

Billy Joel is brought in to sing about the contents found in Peter's stomach in "Boy (Dog) Meets Girl (Dog)" to the tune of "We Didn't Start the Fire", and follows that up with other observations in the episode and the closing song when the writers couldn't complete an ending. Peter also comments on his use of the name "Billy" as an adult.

When Stewie observes that Peter can't handle pressure in "Trump Guy", it launches a cutaway gag of Joel singing the song "Pressure" at a concert. As he sings the final bars of the song, Peter tries to sing along but it comes out as "Uptown Girl".

Retrieved from "https://familyguy.fandom.com/wiki/Billy_Joel?oldid=209745"
Community content is available under CC-BY-SA unless otherwise noted.