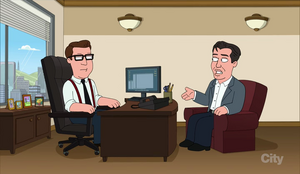 William George "Billy" Zane, Jr. (born February 24, 1966) is an American actor and producer, known for his work in Titanic (1997), and for his television role in Twin Peaks.

When Tom Tucker is fired from Quahog 5 News in "The New Adventures of Old Tom", Peter attempt to cheer him up causes him to note that his career is over, like Billy Zane's. Billy is let go by his agent, mistaking a role in an electronic cigarette commercial that was played by someone else. Later, Billy happily notes that he is back on television, mistaking Tom Tucker for himself until straightened out by his wife.

Billy Zane appears in "Peter & Lois' Wedding" as a suitor to Lois chosen by Carter Pewterschmidt.

Retrieved from "https://familyguy.fandom.com/wiki/Billy_Zane?oldid=216586"
Community content is available under CC-BY-SA unless otherwise noted.