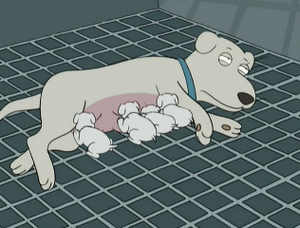 Biscuit was Brian Griffin's mother. Brian last saw her as he was taken from the puppy farm. She died about a year prior to the events of "Road to Rhode Island" and was stuffed and used as an end table by her owners. Brian was utterly dismayed when he saw this, so he insisted on giving her a proper burial. Brian and Stewie stole her remains and gave her a decent burial in a nearby park. According to the owner, she loved Brian and all of her puppies. She never intended to give Brian away out of spite, she just gave him away because she thought that Brian would have a happier life, which he reluctantly admits is true.

Biscuit appears nurturing her puppies in a flashback Brian has in "Chris Cross".

Cranky from lack of sleep, Stewie claims to have been "beefing" Brian's mom at night in "A Lot Going On Upstairs", although Brian points out that she's dead.

Retrieved from "https://familyguy.fandom.com/wiki/Biscuit?oldid=213269"
Community content is available under CC-BY-SA unless otherwise noted.