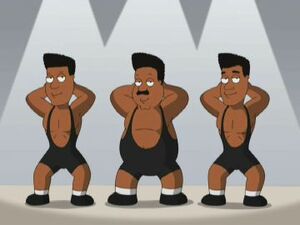 Black Box (later Blackbox) was an Italian house music group active in the late 1980s and early 1990s. The members of the group included a trio made up of a club DJ (Daniele Davoli), a classically trained clarinet teacher (Valerio Semplici), and a keyboard and electronic music "wiz" (Mirko Limoni).

In "Play It Again, Brian", Cleveland Brown was unavailable to babysit Meg, Chris, and Stewie Griffin because he was on tour with the band. He is then seen performing "Everybody Everybody" with the group.

Retrieved from "https://familyguy.fandom.com/wiki/Black_Box?oldid=226481"
Community content is available under CC-BY-SA unless otherwise noted.