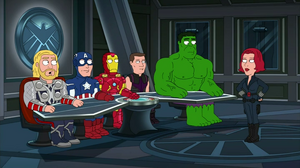 Black Widow, also known as Natasha Romanoff is a fictional character, a superhero appearing in comic books published by Marvel Comics. The character was first introduced as a Russian spy, an antagonist of the superhero Iron Man. She later defected to the United States, becoming an agent of the fictional spy agency S.H.I.E.L.D., and a member of the superhero team the Avengers.

In "Our Idiot Brian", Stewie accuses Brian of being as useless as the Black Widow of The Avengers when he prefers to stay dumb. Black Widow is questioned by Captain America, Iron Man, Thor, The Incredible Hulk and Hawkeye as to her powers, which she only offers up as kicking. While the rest of the team jokes at her expense, Hulk tries to stay out of it, but is accused of just trying to be nice.

Retrieved from "https://familyguy.fandom.com/wiki/Black_Widow?oldid=194645"
Community content is available under CC-BY-SA unless otherwise noted.