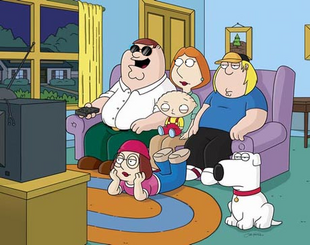 Peter talking to his family after discovering he is blind 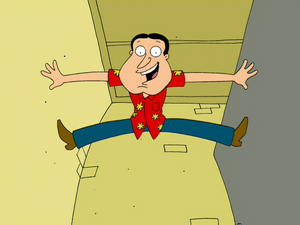 During a trip to the bowling alley, in which Mort Goldman bowls a perfect game with Peter and his friends, Lois goes to the ladies’ restroom. While placing toilet paper on the seat, she repeatedly hears someone muttering “giggity.” She finally looks up to see Quagmire suspending himself from the ceiling and watching her. Lois, Loretta and Bonnie join forces to demand his eviction from the neighborhood, but Peter protests.

After another protracted chicken fight for their second encounter, Peter convinces the women to allow him to try to reform Glenn. After intensive conditioning therapy, consisting of a whirling ceiling fan being placed just above his nude groin while being shown a Victoria’s Secret catalog, Glenn seems to be able to function in normal society again.

As a test, his friends take him to a local mall, where his is repeatedly tempted by provocative situations such as scantily clad cheerleaders splashing water at each other and making out and a mother breastfeeding her baby. Overwhelmed, Glenn flees only to find himself in the mall’s security control room, staring at dozens of closed-circuit television monitors from women’s dressing rooms. He sees a woman collapse and rushes to her location, saving her life and becoming a hero, even though he was just using the opportunity to take advantage of her. 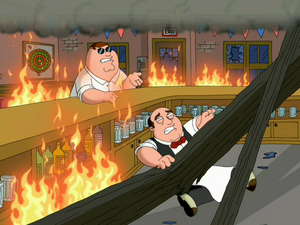 Peter grows jealous of his friends’ heroic achievements and attempts to secure his own fame by setting a world record for the most nickels eaten. Unfortunately, he soon loses his sight due to nickel poisoning. Later, the Drunken Clam catches on fire after God accidentally strikes and vaporizes a woman with lightning while flirting, trapping Horace. The oblivious Peter ties his guide dog, Brutus, to a nearby hobo and enters the flaming bar. After hearing Horace’s cries for help, Peter pulls him free of the debris and carries him to safety. Peter is hailed as a hero, given an award by the mayor, and regains his vision from an eye transplant from the hobo who was strangled and dragged to death by his guide dog.

Retrieved from "https://familyguy.fandom.com/wiki/Blind_Ambition?oldid=216393"
Community content is available under CC-BY-SA unless otherwise noted.