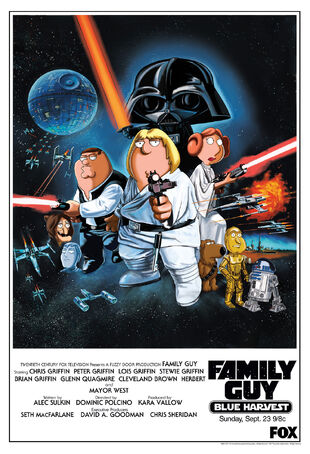 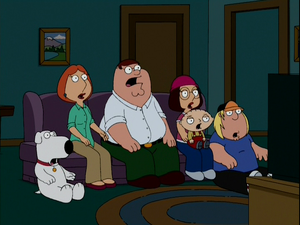 The Griffins are watching a golf tournament on TV, in which the announcers speculate on the possibilities of a sexual encounter with Phil Mickelson's wife, when the power goes out. The family is left to wonder what to do for entertainment now that they are without television. After Brian's suggestion that they turn to reading is met with laughter from the rest of the family, Meg suggests they should tell stories. She asks Peter to tell the story of her birth, but Peter rushes through the demeaning story.

Peter then decides to retell the story of Star Wars Episode IV: A New Hope. The film's opening crawl gives spoilers on the relationship between Luke Skywalker, Darth Vader and Princess Leia, then goes off on a tangent about Angelina Jolie and her relationship with her brother before showing the starship being chased by the Star Destroyer over Tatooine. On board the rebel ship are the droids C-3PO (Quagmire) and R2-D2 (Cleveland), who are visibly shaken when their ship is being fired upon. Imperial Stormtroopers begin boarding the ship, overwhelming the Rebel troopers on board. During the chaos, Artoo and Threepio are separated. Artoo finds himself with Princess Leia (Lois), who tries to record a holographic message to "Obi-Wan Kenobi," but encounters complications that Artoo tries to help her through. Artoo then decides to just carry the message himself. The two are then spotted by Stormtroopers; Leia is captured while Artoo and Threepio board an escape pod and make their way to Tatooine below. 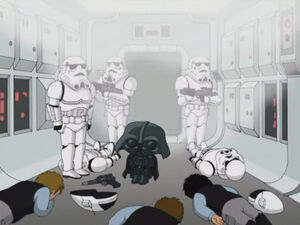 After her capture by Imperial Stormtroopers, Leia is brought before Darth Vader (Stewie). Vader demands to know where she hid the Death Star plans; Leia claims that she hid them in one of 26 briefcases accompanied by the models from Deal or No Deal. After choosing the $5 briefcase, Vader orders Leia taken away. Meanwhile, on the planet Tatooine, Threepio asks Artoo if he'd prefer to have sex with Jabba the Hutt after a shower or a service droid; Artoo takes the remark personally, since his father was reportedly a service droid, and leaves Threepio in disgust. Artoo cautiously makes his way through the Jundland Wastes, where he is captured by Jawas and taken aboard their sandcrawler, where Threepio is also being held. At this time, on board the Death Star, Darth Vader, Grand Moff Tarkin (Mayor West) and a group of other Imperial officers are discussing the Death Star's weakness: a small exhaust port that, when fired into with a proton torpedo, could destroy the entire station. Vader orders the port boarded up, but only once price estimates are obtained.

Back on Tatooine, Threepio and Artoo are sold with other droids to the Lars moisture farm owned by Owen and Beru Lars (Carter and Barbara Pewterschmidt). Their nephew, Luke Skywalker (Chris), dreams of leaving his home to join the Rebel Alliance with his friends and fight the Empire, but his aunt and uncle won't allow it. That night, Luke stumbles across Leia's message while cleaning Artoo. The next morning, Threepio finds that Artoo has left in the middle of the night, so he and Luke set out to the Jundland Wastes where they find him. There, they find that Tusken Raiders are coming their way. After trying to investigate, Luke is attacked by a lone Tusken (Opie) but is saved by Obi-Wan Kenobi (Herbert). 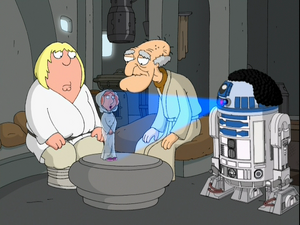 At Obi-Wan's hut, Luke plays Leia's message to him, explaining that the Death Star plans are stored within Artoo and must be taken to her father on her home planet of Alderaan. Obi-Wan tells Luke he must learn the ways of the Force and come with him, and gives him his very own lightsaber. He also tells Luke that the Empire is probably going to come looking for Artoo and Threepio for the data they possess. Luke deduces that their search would lead them back to his home and, as he feared, finds his home destroyed along with his aunt & uncle. Left with no other options, Luke, Obi-Wan and the droids make their way to Mos Eisley Spaceport in search of a pilot and ship to take them to Alderaan. They enter a cantina after Obi-Wan uses a Jedi mind trick on the bouncer and hide the droids. In the cantina, Luke and Obi-Wan recruit Han Solo (Peter) and Chewbacca (Brian) to take them on their ship, the Millennium Falcon. Before taking off, Han disposes of the bounty hunter Greedo (Bruce), who came to collect the bounty placed on his head by Jabba the Hutt. The group is then spotted by Imperial forces, but fortunately escape with slick maneuvers which are really just listing lazily to the left and entering hyperspace.

Back on the Death Star near Alderaan, Tarkin tells Leia that the Empire has chosen to test their "Death Star planet-blower-upper gun" on her home planet. Leia objects, but Vader and Tarkin decide to fire it anyway, and Leia is forced to watch in horror as her planet is destroyed in front of her. Meanwhile, on board Falcon where Luke continues to train under Obi-Wan in the ways of the Force, the group arrives at Alderaan's coordinates and find themselves in the middle of an Asteroids screen; it is clear to them that it was destroyed by the Empire. The Millennium Falcon is then caught by the nearby Death Star's tractor beam. 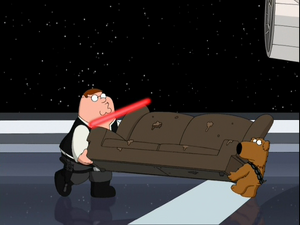 On board the massive station, Han and Luke disguise themselves as Stormtroopers and sneak deeper into the Death Star. Obi-Wan goes off by himself to shut off the tractor beam as Luke, Han and Chewie rescue Leia.

The four are inadvertently rescued from the garbage compactor when a stoned Threepio leans against the shutoff switch. Han and Chewie insist on taking a sofa with them when they escape the Death Star. Kenobi is finally confronted by Vader. Kenobi's lightsaber falls limp until he sees Luke, and then he sacrifices himself as the other characters escape. Han decides to ride on the outside due to difficulties getting the couch from the compactor into the Falcon. Afterwards, Han and Luke successfully fight off the "Thai" fighters sent to stop them, and escape to the rebel base. 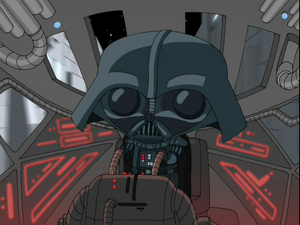 Before the Battle of Yavin, the Rebel pilots watch a training video featuring Magic Johnson. The battle unfolds mostly as it does in the film with Han and Chewie, much more comfortable in their new couch, saving Luke at the last minute while he is guided through the Force by the dead Obi-Wan.

Finally, the Griffins' power returns. Everyone thanks Peter for keeping them entertained, though Chris accuses Peter of ripping off the Star Wars episode of Robot Chicken, a discussion in which Peter says he is "not a fan" of that show. Chris leaves frustrated, Peter starts humming the Star Wars theme, and the episode ends.

Retrieved from "https://familyguy.fandom.com/wiki/Blue_Harvest?oldid=216354"
Community content is available under CC-BY-SA unless otherwise noted.