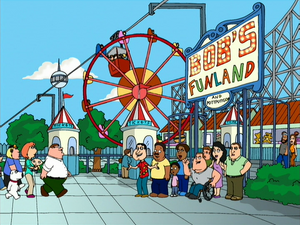 Bob's Funland Amusement Park is where Peter Griffin's family and friends take him to celebrate his birthday in "A Picture's Worth a Thousand Bucks". Joe Swanson rides the roller coaster in his wheelchair in front of the coaster train, Stewie becomes fascinated with an evil looking clown doll at a target range and Meg is simply told she weighs "a lot" at the Guess Your Weight booth. When Peter launches his ball while playing putt-put golf, the owner asks him to leave. The owner turns out to be Bob Funland, who became successful after Peter used to tease him as a child because he mourned the death of his mother.

Brian and Stewie's musical group "Red Shirt, Blue Shirt" perform at Bob's Funland in "The Boys in the Band". There, Olivia Fuller convinces Brian to dump Stewie from the duo so she can take his place.

After a promising start to a relationship, Brian suggests a date with Holly & Kyle to Bob's Funland in "Boy's Best Friend", only for Holly to dump him for an ex-boyfriend.

Retrieved from "https://familyguy.fandom.com/wiki/Bob%27s_Funland_Amusement_Park?oldid=230180"
Community content is available under CC-BY-SA unless otherwise noted.