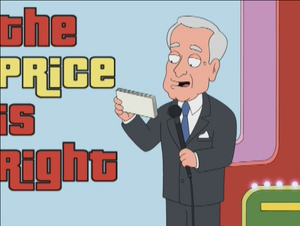 Robert William "Bob" Barker (born December 12, 1923) is the now-retired host of The Price is Right. He hosted the program from 1972 to 2007, and also hosted Truth or Consequences from 1956-1975. He voices himself in all of his Family Guy appearances.

Barker is known for his animal advocacy, as seen when he gave a reminder to viewers to spay and neuter their pets at the end of each show. Brian was once watching an episode and expressed distaste at that statement in "Brian in Love". The set of Survivor, is apparently on the same set as The Price is Right, as revealed when Peter was a contestant on Survivor and knocked over the reality show's backdrop in "Screwed the Pooch".

Prince was once a contestant on The Price is Right, as seen in "Tales of a Third Grade Nothing".

Bob Barker is mentioned in "Stewie Goes for a Drive" when Peter is annoyed by a dog with two different colored eyes and appears to have an erection.

A May 6, 2015 comic panel of Pop Culture Shock Therapy features Bob, as well as Peter and Brian.

Retrieved from "https://familyguy.fandom.com/wiki/Bob_Barker?oldid=225098"
Community content is available under CC-BY-SA unless otherwise noted.