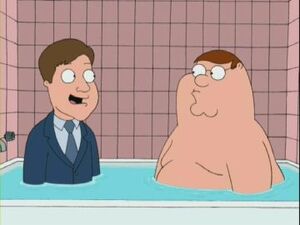 Robert Quinlan "Bob" Costas (born March 22, 1952) is an American sportscaster, on the air for the NBC network since the early 1980s.

He appears as himself in "Patriot Games", "Petergeist" and in "Turban Cowboy".

Retrieved from "https://familyguy.fandom.com/wiki/Bob_Costas?oldid=208593"
Community content is available under CC-BY-SA unless otherwise noted.