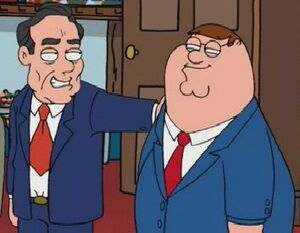 Robert Joseph "Bob" Dole (born July 22, 1923) is an attorney and retired United States Senator from Kansas from 1969–1996, serving part of that time as United States Senate Majority Leader, where he set a record as the longest-serving Republican leader. He was his party's 1996 presidential nominee but lost the election to incumbent Democrat Bill Clinton.

Dole offers his support for Peter Griffin in "Mr. Griffin Goes to Washington", but falls asleep while repeating his name.

Retrieved from "https://familyguy.fandom.com/wiki/Bob_Dole?oldid=163545"
Community content is available under CC-BY-SA unless otherwise noted.