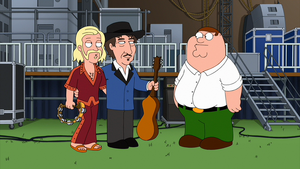 Bob Dylan (born Robert Allen Zimmerman, May 24, 1941) is an American singer-songwriter, artist and writer with much of his most celebrated work originating from the 1960s.

In "Fore Father", Stewie tells himself “do not go gentle into that good night.” He first attributes the quote to Bob Dylan but then corrects himself to poet Dylan Thomas.

Dylan's song "Hurricane" plays at the end of "McStroke".

In the uncensored version of "In Harmony's Way", Peter spots Bob Dylan at the music festival. He asks him if his song, "Mr. Tambourine Man" was inspired by an attempt to attract the attention of an actual tambourine player, a fact that is confirmed by Dylan and the player himself.

Retrieved from "https://familyguy.fandom.com/wiki/Bob_Dylan?oldid=208243"
Community content is available under CC-BY-SA unless otherwise noted.