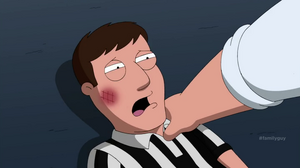 Bob Hanley is an old friend of Peter Griffin's whom he beats up in revenge for a high school football team losing a game to Edenville in "Boopa-Dee Bappa-Dee".

As Peter demands to know which part of Edenville a referee is from, he discovers it is his old friend Bob from West Edenville. As he continues to beat him, they catch up on events as Peter sends his regrets for the passing of Bob's dad as Bob thanks him for the flowers. Peter introduces Chris who also beats Bob as he gives his greetings.

Retrieved from "https://familyguy.fandom.com/wiki/Bob_Hanley?oldid=153093"
Community content is available under CC-BY-SA unless otherwise noted.