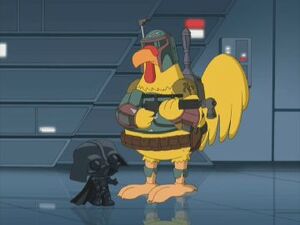 Boba Fett, portrayed and voiced by several actors, is a character in the Star Wars fictional universe. A bounty hunter hired by Darth Vader to track down the Millennium Falcon, he is the "next major villain" after Vader in Star Wars Episode V: The Empire Strikes Back (1980). Star Wars Episode II: Attack of the Clones (2002) establishes that Boba Fett is a clone of Jango Fett (Temuera Morrison), a bounty hunter who raises Boba as a son.

In "Screwed the Pooch", Peter bets Lois his Star Wars collection, except for Boba Fett.

In "Brian Wallows and Peter's Swallows", when Peter imagines the baby White-rumped Swallows as his children, the bird for Meg wears a purple version of Fett’s helmet.

Ernie the Giant Chicken portrayed Boba Fett in Something, Something, Something, Dark Side and It's A Trap!, fitting as Peter Griffin, Ernie's rival, portrays Han Solo. They are about to fight on the ship over the Great Pit of Carkoon, but instead of an epic battle like in other Family Guy episodes, Boba Fett falls down.

Peter includes a line about a Boba Fett action figure in the song "Credit Card Debt" in "In Harmony's Way".

Retrieved from "https://familyguy.fandom.com/wiki/Boba_Fett?oldid=225099"
Community content is available under CC-BY-SA unless otherwise noted.