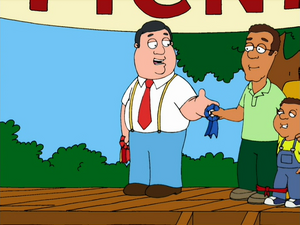 Bobby Hammill is a character who competed in the athletic events with his father at the father-son picnic seen in a flashback in "Holy Crap". Going up against Jimmy Lawson, his dad, Peter Griffin and his substitute dad, the Hammill pair won the festivities and earned a first-place ribbon.

Retrieved from "https://familyguy.fandom.com/wiki/Bobby_Hammill?oldid=93502"
Community content is available under CC-BY-SA unless otherwise noted.