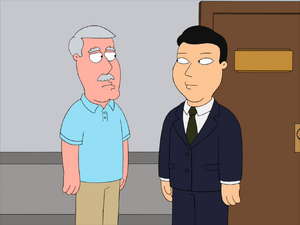 Bobby Lee (born September 17, 1972) is an American actor and comedian who is best known for his membership in the recurring cast of the live comedy series MADtv from 2001 to 2009 and for his roles in the films Harold & Kumar Go to White Castle and Pineapple Express.

Bobby is credited as the "sharp dressed Asian man" in "Business Guy" and the "Chinese man" in "Amish Guy".

Retrieved from "https://familyguy.fandom.com/wiki/Bobby_Lee?oldid=213565"
Community content is available under CC-BY-SA unless otherwise noted.