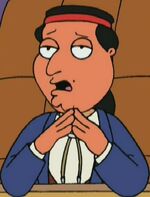 Bobby Slayton (born May 25, 1955) is an American stand-up comedian known as "The Pit Bull of Comedy" and Yid Vicious. Slayton, a native of Scarsdale, New York, is known for a supporting role in the 2001 film Bandits, and as a frequent guest on The Adam Carolla Show.

He provides the voice of Leonard Cornfeathers, the boss of the Geronimo's Palace Casino in "The Son Also Draws".

Retrieved from "https://familyguy.fandom.com/wiki/Bobby_Slayton?oldid=185704"
Community content is available under CC-BY-SA unless otherwise noted.