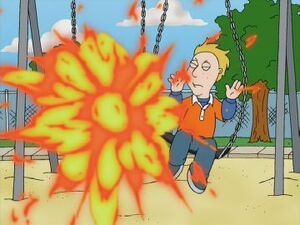 Bobby Williams witnessed the death of his friend in an explosion in "A Picture's Worth a Thousand Bucks" as she was about to become his girlfriend. Unbeknownst to him, an explosive device was accidentally implanted in her by Peter Griffin, who thought the girl was his then-infant son Chris.

Retrieved from "https://familyguy.fandom.com/wiki/Bobby_Williams?oldid=144628"
Community content is available under CC-BY-SA unless otherwise noted.