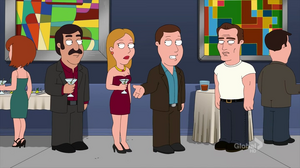 Bokyavroychesku Is a visitor from Uzbekistan at a party for big-name Broadway participants.

In "Brian's Play", Stewie asks Brian to drive him to New York so he can attend a party with other playwrights, noting that all of the big names would be there including Stanley Kowalski from A Streetcar Named Desire. A cutaway gag shows Stanley yelling out the names of the people he is introduced to in a parody if "STELLA!", except for Bokyavroychesku whom he simply greets.

Retrieved from "https://familyguy.fandom.com/wiki/Bokyavroychesku?oldid=138016"
Community content is available under CC-BY-SA unless otherwise noted.