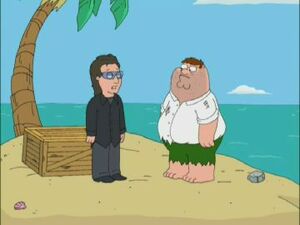 Paul David Hewson, KBE (born 10 May 1960), most commonly known by his stage name Bono, is an Irish singer and musician, best known for being the main vocalist of the Dublin-based rock band U2.

In the third Stewie Griffin: The Untold Story segment, "Stu & Stewie's Excellent Adventure", Peter Griffin recalls being stuck on a desert island with him. They had a crate of food, but Bono was saving it for the starving children. When Peter wasn't looking, Bono started to eat it, but was caught by Peter and knocked unconscious with a rock so he could eat the food.

Peter uses Bono's wearing sunglasses as an example to support Joe in writing his children's book in "The Book of Joe".

In "Scammed Yankees", Carter Pewterschmidt finds a village in Africa that has never herd of Bono.

Chris Martin is compared to a "watered-down" Bono in "Road to India".