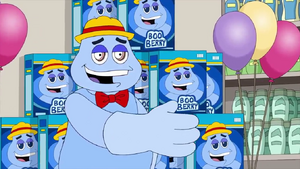 Boo Berry is a fictional character that appears as one of the General Mills monster-themed breakfast cereal mascots. The series also includes the currently produced Count Chocula, and Frankenberry, and the limited production Fruit Brute and Fruity Yummy Mummy.

During a cutaway gag in "Jungle Love", Peter, serving as Sandy Duncan's glass eye, asks her what she's buying at the grocery store. Sandy answers by saying "Some breakfast cereal". Peter disapproves of the cereal and advises her to get some Boo Berry.

After Peter meets a Stop 'N Shop employee dressed as Boo Berry in "Dog Bites Bear", he refuses to wash his hand.

Retrieved from "https://familyguy.fandom.com/wiki/Boo_Berry?oldid=227663"
Community content is available under CC-BY-SA unless otherwise noted.