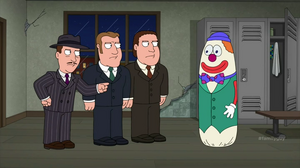 Boppo the Inflatable Punching Clown appears in a cutaway set up in "This Little Piggy" when Stewie tells Brian that he won't back down from a three way with Cassandra, just like Boppo won't back down when threatened. Boppo rolls with the punches from three hoods who are upset that he wouldn't take a dive in a boxing match, but after he pulls out a gun and shoots them repeatedly, takes his own life when cornered by the police.

Retrieved from "https://familyguy.fandom.com/wiki/Boppo_the_Inflatable_Punching_Clown?oldid=214358"
Community content is available under CC-BY-SA unless otherwise noted.