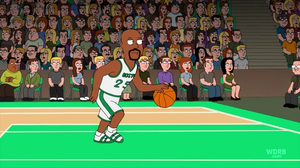 The Boston Celtics are a National Basketball Association (NBA) team based in Boston, Massachusetts. They play in the Atlantic Division of the Eastern Conference. Founded in 1946, the Celtics play their home games at the TD Garden, which they share with the Boston Bruins of the NHL. The Celtics' 17 NBA Championships are the most for any NBA franchise.

During a night in Boston with the guys in "The Giggity Wife", Peter believes they are watching a Celtics game on a low-definition television at a Boston bar. Later, a drunken Peter interrupts a Celtics game at the Boston Garden by blocking a Celtics player's shot.

In "Fecal Matters", Peter plays imaginary basketball in an empty TD Garden during a flu epidemic, pretending to play for the Boston Celtics. He fantasizes about the team being down by one with a chance for him to make a game-winning shot before accidentally kicking the ball out of bounds.

Retrieved from "https://familyguy.fandom.com/wiki/Boston_Celtics?oldid=229658"
Community content is available under CC-BY-SA unless otherwise noted.