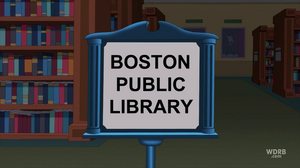 During a drunken night in Boston in "The Giggity Wife", Peter reads and vomits on Betty Friedan's The Feminine Mystique at the Boston Public Library.

Retrieved from "https://familyguy.fandom.com/wiki/Boston_Public_Library?oldid=138208"
Community content is available under CC-BY-SA unless otherwise noted.