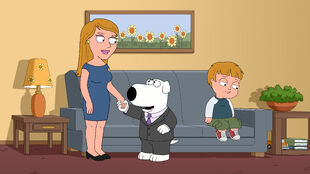 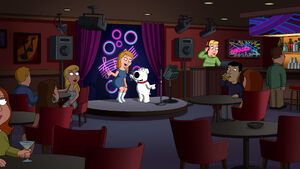 While shoe shopping for Chris at the mall, Brian scores a date with Holly the clerk which goes exceedingly well. But when he picks her up for a second date, he finds out that she has a son named Kyle who gives him the cold shoulder. He tries to help him with his pinewood derby car but is still shunned until some bullies show up and Brian comes to his rescue. But after a family dinner, Brian suggests a trip to Bob's Funland, but finds out that she wants to dump him and date other people. Equally heartbreaking is that Brian and her son can't be together anymore either but Stewie suggests that he meet with Kyle anyways. He arrives at the end of the pinewood derby to find Kyle finished next to last, but they are still happy he made an appearance. As they start to walk away, Holly stops to ask if Brian was busy on Saturday night. He arrives to sit with Kyle while Holly goes out on a date. 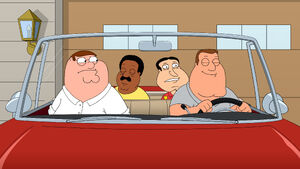 Meanwhile, Joe's uncle passes away and leaves him his classic sports car with instructions that he show it at an upcoming car show. But when the guys asked him to take them for a ride and it, he can only pretend to drive due to his uncle's instructions to only trailer the car. Feeling that the car is going to waste, Peter talks Cleveland and Quagmire into taking it out for a ride themselves. Peter distracts Joe with a pretend survey while Cleveland locates the key in the ashtray and the three of them drive away. While Peter is driving, he decides to use his cell phone and causes the car to crash into a pile of trash cans, wrecking it and killing Oscar the Grouch. In an attempt to fix the car, Peter makes things worse so they completely wreck the car in the style of Fast Times at Ridgemont High, but Joe blows the reference. Still, he admits he's sort of relieved because the car required non-stop care and they guys take him for a drive in it by working the pedals for him.

Retrieved from "https://familyguy.fandom.com/wiki/Boy%27s_Best_Friend?oldid=230271"
Community content is available under CC-BY-SA unless otherwise noted.