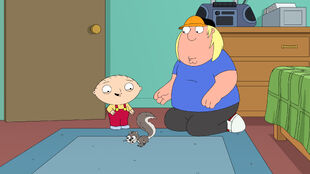 Boys & Squirrels
Stewie and Chris nurse an injured squirrel back to health. 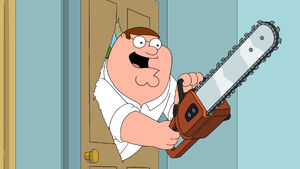 When a neighbor's suicide results in Peter getting a chainsaw, he abuses it in his usual manner. When he attempts to open a hole in a tree for the Keebler Elves. he injures his elbow and the tree falls, leaving a young orphaned squirrel. Deciding that it's too much work for one person, Chris and Stewie decide to raise it together.

Peter goes to Dr. Hartman for help and his treatment results in Peter's true height being restored. He surprises the guys with his new appearance, but when they go to the Quahog fair, not only does his height cause issues on the rides, he torments the kids by telling them he's 'Slender Man.' Depressed, he seeks Lois' help and she is able to shrink him by belittling him, but when she finishes, he turns out to only be inches tall. 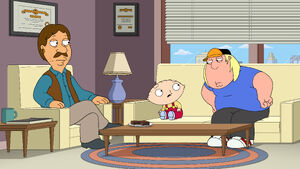 Meanwhile, Chris and Stewie's squirrel recovers nicely, but as they shoot a video of its first steps, Brian snatches it and mauls it to death. After the funeral, Chris starts to pack the squirrel's things away but this triggers an argument and blame game between the two of them as to whose fault it was. They end up going for counseling with Bruce, and work out most of their issues, although a debate over its gender nearly reignites a new argument.

At Christmas, Stewie retrieves the mail and finds a Christmas card that they had sent with their picture with the squirrel, which causes him to break down in tears.

Retrieved from "https://familyguy.fandom.com/wiki/Boys_%26_Squirrels?oldid=227209"
Community content is available under CC-BY-SA unless otherwise noted.