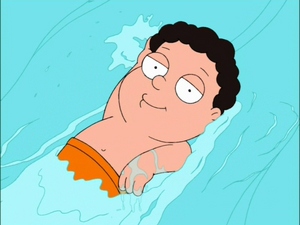 Brad is a character that appeared in two segments of Stewie Griffin: The Untold Story.

In the first segment, "Stewie B. Goode", he is the best swimmer in his class. This begins to make Stewie Griffin, who was taking the same class, jealous. Despite being a very good swimmer, Brad is very nice, and tries to make friends with Stewie. As a result of this, Stewie plots to kill Brad by having a lifeguard tower fall on him. However, the bomb malfunctions, and it ends up falling on Stewie instead.

Brad also makes a cameo in the finale "Stu & Stewie's Excellent Adventure", where the same Stewie travels back in time to the day where past Stewie's plot to kill Brad took place. Although a time paradox is created whenever present Stewie saves past Stewie, this paradox does not seem to effect Brad at all.

Retrieved from "https://familyguy.fandom.com/wiki/Brad_(Stewie_B._Goode)?oldid=90470"
Community content is available under CC-BY-SA unless otherwise noted.