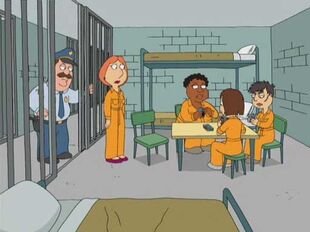 Lois with her fellow inmates

Breaking Out is Hard to Do
Lois becomes a kleptomaniac. 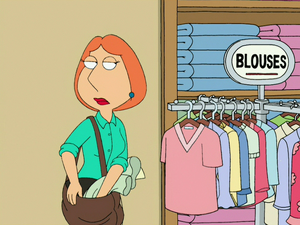 During a grocery shopping trip, Lois is caught short on cash. She pretends to return a ham to the meat department but instead hides it in her purse. She enjoys the rush from stealing so much that she indulges in a massive shoplifting spree culminating in the theft of a Matisse painting. But during the theft of a car muffler, Brian shows Lois the evil of her ways and she repents, but Joe Swanson arrests her before she is able to return the merchandise. Lois is sentenced to three years in prison, which she is resigned to serve. The Griffin household quickly plunges into filth and chaos in her absence, and during a prison visit, Peter decides to smuggle her out of jail. 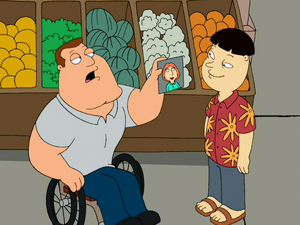 They hop into a laundry van and end up in “Asiantown” where they rent a shabby apartment and start new lives, such as Chris working as a rickshaw driver and Peter an unsuccessful Sumo wrestler. Joe tracks them down and pursues them in a rickshaw chase until the Griffins flee into the sewers; then he commandeers a police helicopter and follows them further, but ends up being followed by TIE Fighters. He manages however to destroy the Imperial ships and continue his chase. Lois decides to surrender and face justice, then saves Joe’s life when he slips and is nearly swept off a nearby ledge. In gratitude, he somehow manages to get Lois’ sentence remanded, and life returns to normal for the Griffins.

Previous Episode /// Breaking Out is Hard to Do \\\ Next Episode

Retrieved from "https://familyguy.fandom.com/wiki/Breaking_Out_is_Hard_to_Do?oldid=216388"
Community content is available under CC-BY-SA unless otherwise noted.