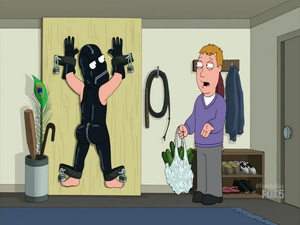 Breckin Erin Meyer(born May 7, 1974) is an American actor, comedian, writer, producer and drummer, appearing in films such as Freddy's Dead: The Final Nightmare, Clueless, The Craft and John Carpenter's Escape from L.A..

Meyer provides the voice of the S&M guy in "A Lot Going On Upstairs".

Retrieved from "https://familyguy.fandom.com/wiki/Breckin_Meyer?oldid=185603"
Community content is available under CC-BY-SA unless otherwise noted.