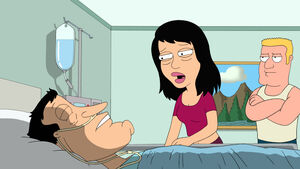 Brenda stays with her brother in "Jerome Is the New Black". She had a boyfriend named Jeff who beats her often. When Brian accidentally mistakes her as a girlfriend with whom Quagmire was having sex, Quagmire angrily corrects him. She agrees with Glenn and Jeff that people should not insult family members. She then gets beat again after.

In "Screams of Silence: The Story of Brenda Q.", Brenda comes to visit Glenn in the hospital after he nearly chokes himself to death in erotic auto-asphyxiation. While Quagmire recovers from his "accident" at the hospital, his sister Brenda and her abusive boyfriend Jeff come to visit him. While Quagmire is unconscious, Brenda sings him a childhood nursery rhyme to help him recover causing him to wake up. Despite Jeff's complaints, Brenda agrees to take care of Glenn while he recovers. As the entire neighborhood is kept awake with Jeff's rants, Lois tries to talk to Brenda about leaving Jeff on a day out at a restaurant. When Brenda suspiciously continues to wear sunglasses inside the restaurant, Lois discovers Jeff gave her a black eye. Brenda makes excuses for Jeff's treatment of her to Lois' disgust. Quagmire worries that some night Jeff may actually kill her but Joe claims he can't act until after the fact and suggests an intervention, most of which goes badly, but Glenn makes a heartfelt plea and seems to have won over his sister until Jeff walks in. When Glenn tries to show Jeff the door, Jeff has Brenda announce that they're getting married because she's pregnant. Later that night over cards, Glenn continues to worry about Jeff's treatment of Brenda and decides to kill him for her sake. After the deed is done, they forge a fake note for her to read.

In her appearance in "Jerome Is the New Black", she was voiced by Nana Visitor. In "Screams of Silence: The Story of Brenda Q.", she is voiced by Kaitlin Olson.

Brenda appears at her grandmother's funeral in "Hot Pocket-Dial".

Despite still being alive, she is seen in a hallucination of Peter's on a cruise ship full of deceased characters in the Panama Canal in "Coma Guy".