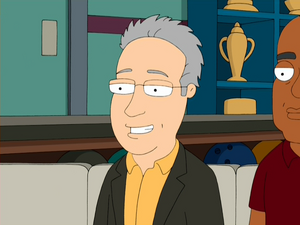 Brent Jay Spiner (born February 2, 1949) is an American actor, best known for his portrayal of the android Lieutenant Commander Data in the television series Star Trek: The Next Generation and related films.

He appeared as Data in a cutaway scene in "Peter's Got Woods" and as himself in "Not All Dogs Go To Heaven" with his castmates at the convention and forcibly spending the day with Stewie Griffin.

Retrieved from "https://familyguy.fandom.com/wiki/Brent_Spiner?oldid=136232"
Community content is available under CC-BY-SA unless otherwise noted.