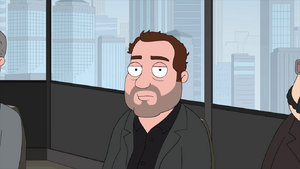 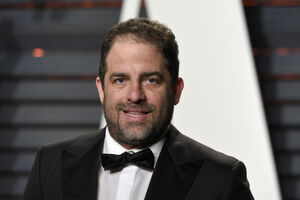 Brett Ratner (born March 28, 1969) is an American director and producer, known for directing the Rush Hour film series, X-Men: The Last Stand, and Tower Heist. He was also a producer of the films The Revenant, War Dogs, The Lego Ninjago Movie, and the Horrible Bosses series. In late 2017, a former talent agency employee accused Ratner of rape and seven other women accused him of sexual misconduct and harassment, resulting in his termination by Warner Brothers.

While Stewie dances at the sex slave auction in "Leggo My Meg-O", the P.A. announces a $75,000 bid from film director Brett Ratner.

The guys watch Marvel's The Offenders, a parody of The Avengers featuring sexual predators in "HTTPete" in which Brett is one of the members of the group.

Retrieved from "https://familyguy.fandom.com/wiki/Brett_Ratner?oldid=212382"
Community content is available under CC-BY-SA unless otherwise noted.