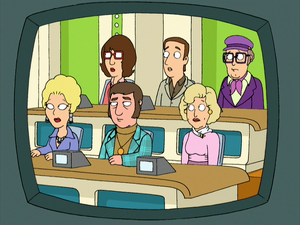 Brett Somers (July 11, 1924 – September 15, 2007) was a Canadian-born American actress, singer, and comedienne. She was best known as a panelist on the 1973-82 era of The Match Game and her role as Blanche Madison opposite real-life husband Jack Klugman on The Odd Couple.

Brett appears as a Match Game panelist in "Mr. Saturday Knight". Dan Palladino notes that they made a mistake in her placement, shifting her to the side from her traditional top-center seat.

Retrieved from "https://familyguy.fandom.com/wiki/Brett_Somers?oldid=114719"
Community content is available under CC-BY-SA unless otherwise noted.