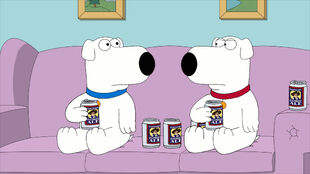 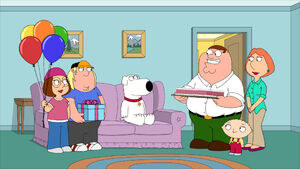 During his birthday, Brian worries about the legacy he's leaving behind, so Stewie offers to help him, with the end result being a robot duplicate as a living biography. Brian is skeptical at first, but the robot shares all of his interests and they soon bond, including having sex. Stewie confronts him the next day about his activities, having built sensors into the robot. As time goes by, robot Brian's imitation of Brian starts to get on the latter's nerves, but when presented with proof that it is indeed his own habits, he admits that he hates himself, deactivating the robot. Stewie arrives applauding, having made his point that Brian is so boring that no one would want his life story. Robot Brian moves out and settles in at the marina, where his various body sensor tones play "Carol of the Bells" until Stewie's phone is interrupted by an unwanted call from Allison Janney. 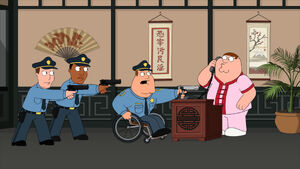 Meanwhile, in order to get out of bad stories by Joe and Cleveland, Peter asks Quagmire to tell a sex story. But as he starts, he is distracted by the smell of a new Asian massage parlor. But when Peter finds out how much Quagmire pays for his 'massages,', he lands a job there. Not only is Quagmire distressed when he bumps into him there, but the place is raided by Joe and the police as a brothel. Facing criminal charges, the guys hatch a plan to blackmail Joe in another massage parlor which works despite Joe's attempts to resist.

At home, after coming to the conclusion that all massage workers are prostitutes, Lois inquires why Peter would take such a job and he reveals it was to buy her a fancy comb for her hair. She shows him her bald head under a wig and admits she sold her hair to buy him some massage oil.

Retrieved from "https://familyguy.fandom.com/wiki/Bri,_Robot?oldid=216313"
Community content is available under CC-BY-SA unless otherwise noted.