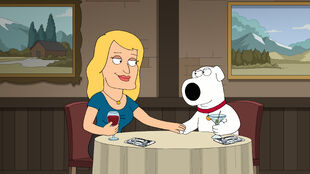 Bri-Da
Quagmire has to deal with a change in Ida's relationship with Brian. 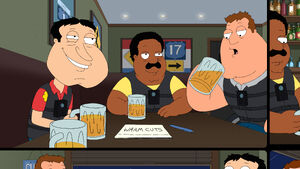 After their nights out, the guys always have trouble remembering the potentially million dollar idea they had the night before so Joe recommends they wear body cams from his work just in case they've come up with another great money-making idea that they forget about. Sure enough, after a night of drinking they realize they came up with a good idea and presented it on Shark Tank, but when everybody realizes Quagmire isn't there they check his camera and find he was having sex. To his horror, he finds the video is uploaded nightly where everyone can see it including his job and Ida. 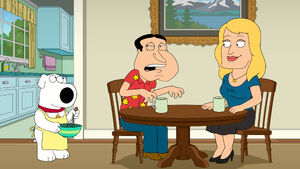 Bummed out because of Quagmire embarrassing himself, Ida's having a lonely drink at the bar of the Park-Barrington Hotel when Brian also stops by for a drink. Striking up a conversation, they decide to find solace in each other's company for the night at the hotel. As Ida resigns herself to Brian leaving again, the latter decides to go ahead and have a relationship with her. However, he still shy about being seen with Ida in public, but when she brings this to his attention, he decides to come completely open with the family and Quagmire. Quagmire takes the news poorly, despite Brian's efforts to try to bond. He finally insists it will either be him or Brian in Ida's life. To Brian's surprise, Ida chooses her son Quagmire. Settling to enjoy what they had, they have to wrap things up when Peter arrives, having knocked Chris out during a spat. That evening, Quagmire and Ida share a good laugh while watching Night at the Museum.

Retrieved from "https://familyguy.fandom.com/wiki/Bri-Da?oldid=217262"
Community content is available under CC-BY-SA unless otherwise noted.