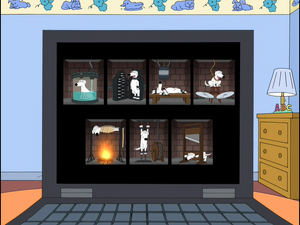 Brian's Brothers and Sisters are Brian Griffin's siblings. They too were born in Austin, Texas to Biscuit and Coco.

In the DVD version of Hannah Banana, Stewie forces Brian to help him get into the Hannah Montana concert by tracking down all of Brian's litter and subjecting them to a possible horrifying death, including death by chocolate, a guillotine, iron maiden and drowning. Using Jerry as an example, Stewie blows his head off with an explosive collar. Brian gives into Stewie's demands when he sees what is in store for the rest of the dogs. Then Brian notices how Stewie could get Brian's brothers and sisters, but couldn't get Hannah Montana concert tickets.

They were also possibly seen in a flashback in "Road to Rhode Island", taking advantage of their mother's milk while Brian is busy complaining about other things.

Retrieved from "https://familyguy.fandom.com/wiki/Brian%27s_Brothers_and_Sisters?oldid=218163"
Community content is available under CC-BY-SA unless otherwise noted.