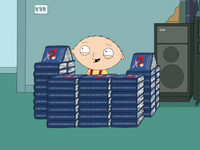 Brian's authorial aspirations have often been the target for parody and criticism by other people on the show. He has written two books, Faster Than the Speed of Love and Wish It, Want It, Do It., with only the latter becoming a bestselling book.

Faster Than The Speed of Love 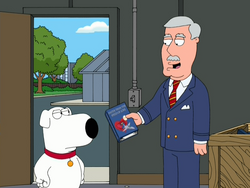 Faster Than The Speed of Love is the novel written by Brian. It has been occasionally mentioned in episodes to poke fun at Brian.

During the afterparty in Stewie Griffin: The Untold Story, Brian explains about working on his novel after Family Guy was canceled.

In "Brian the Bachelor", Stewie asks Brian how he's coming on the novel he's been working on, and if he's been working on it the whole time, and if some friends become enemies, some enemies become friends, or if at the end his main character is richer from the experience. It is then mentioned that he has been working on the novel for three years. The gag of Stewie asking questions about Brian's novel in a high-pitched voice also continued in "Brian Goes Back to College". It wasn't mentioned again until "Movin' Out (Brian's Song)" where he comes up with the name Faster Than the Speed of Love for his novel, which Lois mocks him about, saying she thinks that's the worst title she's ever heard. He then tells her what the story is about, and we find out that the plot line is essentially a rip off of the Iron Eagle movie series, even though he claims he's never seen the movies. His main character, a boy, has to gather all these old World War II pilots to help him rescue his father, which is the third movie. It is then mentioned again in "Baby Not On Board", when Stewie said he would replace every single instance of the word "and" with the word "fart".

Later, in "420", Carter Pewterschmidt publishes two million copies of "Faster Than the Speed of Love" and gets Oprah Winfrey to endorse it, and would be released if Brian sells out and does a public musical performance to make marijuana illegal once again. With Stewie's "support", he agrees to do so. It was later revealed by Tom Tucker in a news broadcast that it set a record for the "worst selling novel of all time", not selling a single copy as it was universally panned by literary critics. Because of this, in "Jerome Is the New Black", while at the restaurant, Quagmire, listing things why he hates Brian, even remarks that Brian is a terrible writer. One episode later, in "Dog Gone", Brian's novel gets awarded for "Special Literary Excellence" at Pizza Parlor, but it turns out to be given by a group of mentally disabled people.

In "Brian Writes a Bestseller", Brian receives 300 boxes of the many copies of his novel returned to him, since his publisher noted how the novel failed to make one sale. This convinces Brian that he's not meant to be a writer and give up. The failed novel's paper shreds were used to pack the boxes of returned novels, as well as other items.

When Brian is recognized from 'his' book in "Movin’ In (Principal Shepherd’s Song)", he believes it to be Faster Than The Speed of Love. However, he quickly learns that it is Stewie's book, Flunky The Dumb White Dog, that portrays him as an idiot.

What I Learned on Jefferson Street

Brian had critical success with What I Learned on Jefferson Street, a teleplay for a pilot in "Brian Griffin's House of Payne". Lois even loved it. However, when it came to casting, Brian's archnemesis, James Woods, auditioned for the main character and totally reinvented the concept of the show, including the title, which was renamed Class Holes!. In the end, he could not put his name on this project, so he "backed out...willingly" as he told Quagmire in "And Then There Were Fewer".

Wish It, Want It, Do It. is the only bestselling novel written by Brian. It was written in "Brian Writes a Bestseller", and was published by Penguin Group. He started writing it after receiving unsold copies of his bomb Faster Than the Speed of Love, which almost drove him to quit writing. At home, he wrote the book in a day. The book ranked #3 on Amazon.com's bestseller list. Brian wrote it as a stealth insult to self-help books in general, and completed it in three hours. It had fifty blank pages in the middle for the reader to fill in on their own.

During his book tour, Brian appoints Stewie as his publicist. He also visits bookstores for book signings, which he uses to pick up female fans. He promotes the book on shows such as Quahog 5 News and Real Time with Bill Maher. By the time he appears on Real Time, Brian's fame had gone to his head and fired Stewie. On Real Time Bill Maher, Arianna Huffington and Dana Gould criticize the book, forcing Brian to admit his opinion that it's crap and his desire to write something that would sell. At this point, Bill loses all respect for Brian and shames him for not standing by his beliefs. This causes Brian to urinate and Bill sends him outside with a newspaper. However, the effects of the book's success still linger when Brian "apologizes" to Stewie but in fact blames him. To counterpoint, Stewie says that Brian can't write.

In "Stewie Goes for a Drive", Brian is seen writing a new fictional novel with another terrible plotline while Stewie takes Brian's keys behind his back. The plot was about a guy who lost everything but finds a new life in Canada and the whole book is an E-mail to his daughter who's dead.

Brian takes Stewie to a book reading by Jonathan Franzen in "Mr. and Mrs. Stewie". But when Jonathan fails to show up after becoming successful, Brian starts to read one of his writings until stopped by Stewie who sprays him with a water bottle. Brian later starts to write again, nearly prompting Stewie to kill him in a promise made to Penelope, who feels that Brian is coming between them.

In "Space Cadet", as the family faces death when their space shuttle goes out of control, Brian worries that his book wasn't everything he wanted in spots.

Brian writes a play, A Passing Fancy that's a hit in Quahog, but his confidence is shaken when he reads a play Stewie wrote that's much better than his. Soon, Stewie's work is Broadway-bound, causing a rift between the two.

After Brian's death in "Life of Brian", his replacement Vinny tries to win over Stewie in "Christmas Guy" by adopting many of Brian's mannerisms including his writing by coming up with Wish it, Want it, You Blew It. 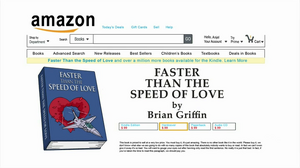 Meg butters up Brian to take her SAT test for her by praising his book, while quoting only the first page of it. She also mentions that it is a shame his book is being dumped on Amazon for 99 cents.

When Meg lies that Stewie has a puppet show, Brian offers to let her use his one act farce, although Chris notes they could write something fresh.

Brian tries to write a sequel to Hemmingway's The Old Man and the Sea, but can't get any peace and quiet.

Stewie lures Brian to his room to use his shrink ray on him by expressing interest in Brian's latest book.

As payback for Flunky The Dumb White Dog which made Brian look like an idiot, Brian find some success using the name 'Griffin Brian' with Swishy the Football Baby, giving the parody of Stewie catch phrases like 'Hey, Sailor', 'Up for brunch?' and 'I'm a bottom.'