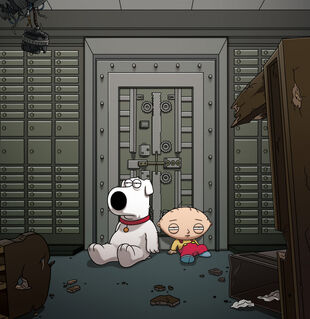 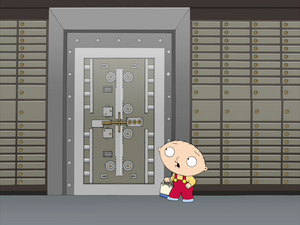 Brian is going through his safety deposit box at the bank and the two discuss a sweater, over which they begin to argue. As Stewie goes to leave, however, the door automatically shuts and locks, locking them in and causing Stewie to crap his pants. They try calling for help, but to no avail. Stewie proposes that he can’t leave his diaper as it is and they ponder about what to do, Stewie concluding that Brian has to eat his poop, at which Brian is repulsed. Brian claims that he’d rather shoot himself - drawing attention to a gun in his box and causing a struggle for the weapon. Stewie gets it and threatens him with the gun, until they realize that Stewie has a mobile phone with a low battery. Unfortunately, Stewie wastes the last of the battery on calling a sweater store. Enraged, Brian slaps him, telling Stewie to go away. Feeling guilty, Brian gives in and says that he will eat his poop. Stewie undoes his overalls and they take his diaper off. Eventually Brian forces himself to eat it, the sight of which causes Stewie to vomit. Eating the vomit also, though willingly, Brian then braces himself and licks his butt. After redressing, Stewie is tired and, as they go to sleep, they realize that the next day is Sunday and that they'll have to spend another day trapped. 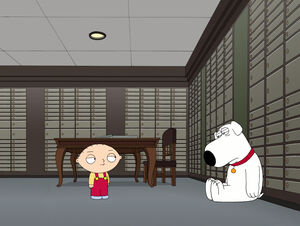 Brian wakes up first, retrieving a drink from his box. When quizzed about the drink, he offers Stewie liquor. They get buzzed and then drunk; Stewie dances whilst Brian joins in and falls on his face. Suddenly, Stewie requests that Brian pierce his ear and Brian agrees. As they prepare, Stewie talks about the bounty hunter and Brian lets slip that he voted for McCain. Ramming in the pin, it gets stuck, so Brian rips it out, causing excessive bleeding. Still drinking, Stewie asks if the dog whisperer is true and they proceed to converse about it, leading Brian to explain that dogs have purpose in their lives, including him. Stewie denying it in his case, the two argue to the point where Stewie claims that he uses Brian, that he has no purpose in life and that he only wanted Brian to eat his poop in order to see just how low he can go. Pulling the gun on Stewie, Stewie leads Brian to notice that a security camera has recorded footage of the poop-licking, much to the dismay of Brian. Jokingly, Stewie picks up the gun but it goes off, the bullet ricocheting around them and causing them to seek refuge under a table.

The next morning, they awake. Stewie does stretches, noticing his ear in the process while Brian is reading. At this point Stewie reveals that he had had energy bars all along, which he shares. Curious, Stewie questions why Brian has a gun. Brian eventually admits that it was intended in case he wanted to commit suicide. He expresses that life is too much, that Stewie was right about not living with purpose and that he can’t find meaning in his life. The Scotch was for his last drink. When Stewie asks if suicide was the reason for their visit, Brian reveals that it was to deposit money in his Christmas account. Finally, Stewie claims that his only friend is Brian, that he means a lot to him after all and that Brian gives Stewie’s life purpose. Asking if Brian will read to him, he obliges, reading to Stewie. Waking up, the vault opens and Brian carries Stewie out.

After the episode, they treat us to some musical moments, showing the "NAAFP Anthem", the Jerry Lewis parody from "Business Guy", "You've Got a Lot to See", "All I Really Need is the Boy", "Shipoopi" and "My Drunken Irish Dad". Before they can present the FCC number, Stewie uses up the rest of the time to rant about how the FCC actually liked the song when it was supposed to make them think about themselves. Afterwards, Brian and Stewie say good night.