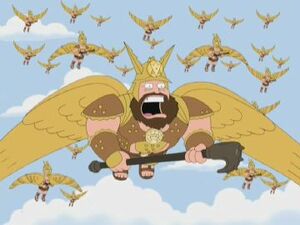 Brian Blessed (born 9 October 1936) is an English actor, author and adventurer. He is known for his loud, booming voice. At the beginning of his career, Blessed had small roles in such cult shows as The Avengers and the original Randall and Hopkirk. His first well-known role was that of PC 'Fancy' Smith in the BBC police drama Z Cars from 1962 to 1965. Other roles have emphasized his comedic abilities: notably Prince Vultan in Flash Gordon (1980); the mad, comic figure of Richard IV in the first series of The Black Adder (1983); and Spiro in the BBC adaptation of My Family and Other Animals (1987). He also played the role of General Yevlenko in the 1988 mini-series War and Remembrance.

Blessed reprised the role of Prince Vultan from Flash Gordon in "Road to Germany".

Retrieved from "https://familyguy.fandom.com/wiki/Brian_Blessed?oldid=168184"
Community content is available under CC-BY-SA unless otherwise noted.