Brian Goes Back to College 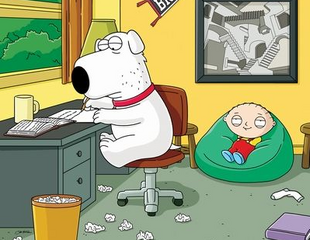 Brian Goes Back to College
...and Stewie Goes With Him for Obvious Comedic Reasons 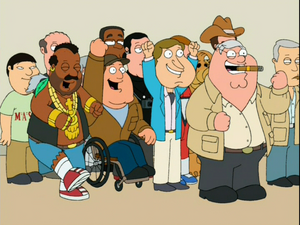 Peter, Joe, Cleveland, and Quagmire attend a costume contest as characters from The A-Team. Peter and his friends find Brian, who is writing a report for the local newspaper. When Peter and his friends win the costume contest because they had an actual black guy, Brian writes a report about it, and is later telephoned by a member of The New Yorker, who tell him they would like him to work for their magazine. Brian is initially given a warm welcome by the staff, but he is immediately fired after he informs them he never graduated from college. Meanwhile, disappointed at no longer being able to be The A-Team, Peter decides to become an unofficial A-Team alongside Joe, Cleveland, and Quagmire, and decide to help their local community. 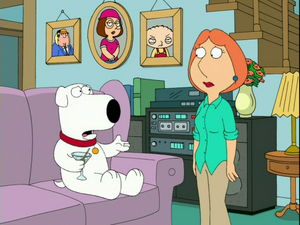 After encouragement from Lois, Brian decides to return to Brown University in order to complete his education so he can return to The New Yorker. Stewie, unknowing to Brian, returns to college with him. Brian's new teacher takes an instant disliking to him, but his opinion of Brian quickly changes after he cheats on a test and gets a high mark. Brian goes to tell his teacher that he cheated, but was interrupted, and the teacher tells him Brian has inspired him, and he was so depressed that he was planning to commit suicide. Meanwhile, Peter becomes very satisfied with his A-Team's early actions, but the team fails a mission to save a local park by becoming sidetracked by the builders. Brian eventually cracks under the pressure of a final test and knowing he will only pass if he cheats, he decides to return home with Stewie. A shocked Lois attempts to encourage him to go back and finish the test, and eventually chases him away with a vacuum cleaner.

Brian ends up exercising for hours with the help of Stewie, but realizes his test is only a few hours away. He becomes stressed at being late for his exam, so Lois persuades Peter to revive The A-Team and drive Brian to his test, which is successful, and Brian arrives on time. He fails his test, but remains proud of himself for not cheating, much to the dismay of the family, who tell him that he probably should have cheated.

Previous Episode /// Brian Goes Back to College \\\ Next Episode