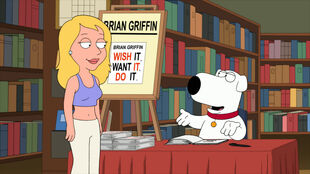 Brian Writes a Bestseller
Feeling discouraged with the progress of his writing career, Brian decides to throw in the towel until Stewie become his manager and one of his books hits the bestseller list. 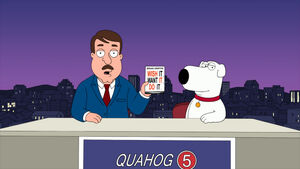 Brian receives all of the unsold copies of his book, Faster Than the Speed of Love, convincing him to give up writing. When he's angry about a self-help book that made the top of the New York Times Bestseller List, Stewie encourages him to write one of his own. Brian cranks out a new book, Wish It, Want It, Do It. in under four hours and through Stewie's contacts, the book becomes a success. 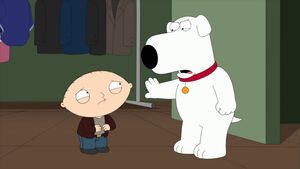 Brian hires Stewie to become his publicist, but when the fame goes to his head, Brian becomes over-bearing and fires Stewie. On Real Time with Bill Maher, Brian starts talking down to the guests panelists until he gets a wake-up call from Bill Maher and admits his book is crap. Embarrassed, Brian halfheartedly apologizes to Stewie, continuing to blame him for what went wrong. Realizing this is as "good" an apology as he is getting, Stewie remarks that Brian can't write.