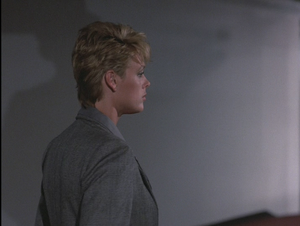 Brigitte Nielsen (born 15 July 1963) is a Danish actress, musician and television personality, who began her career with appearances in the 1985 films Red Sonja and Rocky IV and for her marriage to Sylvester Stallone. She subsequently appeared with him in the 1986 film Cobra, and was noted for her widely publicized breakup with Stallone in 1987, and her relationship with New York Jets Mark Gastineau in 1988.

Peter compares himself to Nielson in "Saturated Fat Guy" during an incident in 2012 when she stumbled around a Los Angeles park while intoxicated. 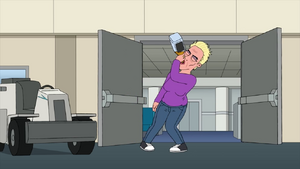 In "Petey IV", Peter is hesitant to accompany Vladimir Putin back to Russia because he might meet Nielson there. When he is told that she is in America, he rushes onto the plane as a drunken Brigitte stumbles after it, smelling the booze on board. She catches the landing gear, but falls off at altitude. As Chris prays for a statuesque blonde woman, she falls in the distance landing in Herbert's house. A small child falls through the roof of the Griffin home as Herbert notes they must have got their prayers crossed.

Retrieved from "https://familyguy.fandom.com/wiki/Brigitte_Nielsen?oldid=200550"
Community content is available under CC-BY-SA unless otherwise noted.