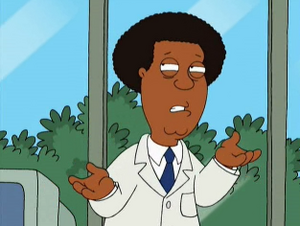 Broderick Brown is Cleveland Brown's younger brother. He appears in "He's Too Sexy for His Fat" when Peter Griffin talks to Cleveland about his son Chris Griffin's weight problem, and Cleveland suggests that they make an appointment with his brother. He's well known for his surgery on Nell Carter, who was twice as big before he performed on her. Broderick promises his technique is safe and doesn't hurt, describing it as sneaking through the bush and skulking around.

He also appears in the Family Guy Video Game. The player, as Stewie Griffin, has to fix the liposuction machines in the hospital so Broderick can open the doors to the next phase.

He has also appeared in The Cleveland Show.

Retrieved from "https://familyguy.fandom.com/wiki/Broderick_Brown?oldid=155740"
Community content is available under CC-BY-SA unless otherwise noted.