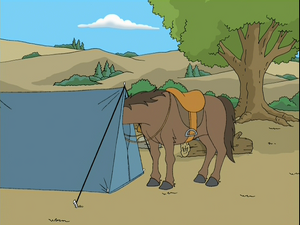 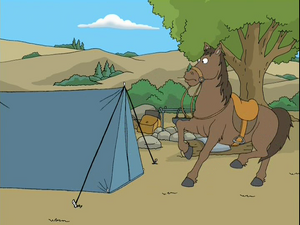 In It Takes a Village Idiot, and I Married One, Peter Griffin sings "Cowboy Gay Sex", a parody of the premise of Brokeback Mountain.

In "The Tan Aquatic with Steve Zissou", Brian is given a copy of a film directed by Devon, a party guest of Stewie Griffin's. He explains that the film is a version of Brokeback Mountain that is told from the point of view of the horses.

When Stewie walks in while Brian is watching The Outlaw Josey Wales in "Herpe, the Love Sore", he makes an allusion to Brokeback Mountain when he inquires about the cowboys having sex with each other.

Retrieved from "https://familyguy.fandom.com/wiki/Brokeback_Mountain?oldid=161530"
Community content is available under CC-BY-SA unless otherwise noted.