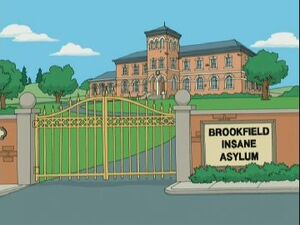 The Brookfield Insane Asylum, located at 56 Meadow Lane in Rhode Island, is home to Patrick Pewterschmidt and his wife Marian in "The Fat Guy Strangler". Patrick was committed by his parents Carter and Barbara Pewterschmidt after a traumatic experience as a child. His sister Lois frees him briefly but after he loses control he is re-committed.

Peter and the guys try searching for his old mattress at the Brookfield Insane Asylum after Lois refuses to have sex on their new one in "Guy, Robot". There, Peter is declared insane for being friends with a black guy, Cleveland for talking back to the white doctor and Joe for simply being handicapped. Quagmire is allowed to enter freely to have sex with the patients.

Retrieved from "https://familyguy.fandom.com/wiki/Brookfield_Insane_Asylum?oldid=190557"
Community content is available under CC-BY-SA unless otherwise noted.