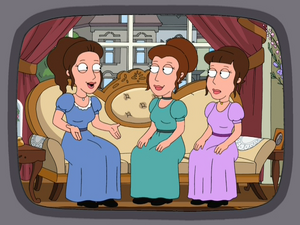 Bryce Dallas Howard (born March 2, 1981) is an American film actress, writer and director known for her work in The Village, Lady in the Water, The Help, Jurassic World and Spider-Man 3.

She is mentioned in the Terminator: Salvation Christian Bale rant heard in the original broadcast of "Ocean's Three and a Half".

Bryce provides the voice in the show 19th Century British Girls Various Reactions to Their Older Sister's Engagement in "We Love You, Conrad".

Retrieved from "https://familyguy.fandom.com/wiki/Bryce_Dallas_Howard?oldid=191218"
Community content is available under CC-BY-SA unless otherwise noted.